ThermoFisher has announced that the NanoDrop™ 1000 will no longer be supported with parts or service. The DeNovix DS-11 Spectrophotometer is a perfect replacement option for the NanoDrop™ 1000. It was named Reviewers’ Choice Life Science Product of the Year for 2017! 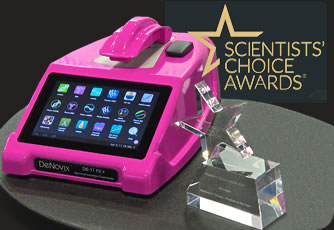 Spectrophotometer with or without Fluorometer or Cuvette.

Contact a Consultant today to set up your free 30-day trial from the DeNovix DS-11 Spectrophotometer line. The DeNovix DS-11 line has many options available and is the best replacement option for the NanoDrop™ 1000.

The National Institutes of Health has lifted a ban on federal funding for precarious research that might develop more contagious and deadly viruses. The move comes just more than three years after U.S. officials issued a pause on such research funding. Alongside the lifted ban, however, the NIH announced a more tedious review process that research proposals must undergo prior to receiving federal grants.

About the Hazardous Research

The worrisome research is called gain-of-function studies. It involves viruses such as influenza, MERS and SARS. Researchers argue that they need to modify the viruses to understand the genetic changes that cause pandemics. Their goal is to determine the risks so that they can prepare for and have better control over such emergencies.

The concern, however, is that mutating these and other viruses so that they can spread among humans quickly could kill millions of people. For instance, the H7N9 bird flu virus has infected over 1,500 people, and 40 percent of them lost their lives. This strain, however, doesn't spread easily from person to person. Modifying its structure could change that, leading to millions of infections and deaths in a pandemic.

Previous Mishaps in the Field

In 2014, a team of government lab technicians found a hazardous bird flu contamination. However, they didn't report it until a month later when other techs started to notice that something was wrong. Later the same year, an active Ebola virus sample was transferred to the wrong lab. At least one technician was exposed. In 2015, a U.S. Army lab mistakenly shipped live anthrax samples to more than 190 labs across the country.

An Overview of the Enhanced Review Process

On Dec. 19, 2017, the Department of Health and Human Services revealed a new framework for research funding decisions. The new plan adds a new level of review by a multidisciplinary group of the HHS. It will have expertise in fields such as security, biosafety, law and ethics.

The HHS group will assess promising research proposals that have passed scientific peer review and fit the definition for enhanced potential pandemic pathogens. It will weigh the benefits and dangers. Then, it will either allow the proposals to go forward, recommend strategies to keep risks to a minimum or reject the studies.

There's much concern that lifting the ban on federal funding for virus studies will create a new pandemic. NIH Director Francis Collins defends the decision, though, saying that they're obligated to ensure that that infectious research is conducted with responsibility. He believes that the new review process will facilitate responsible, safe and secure conduct in this research field.