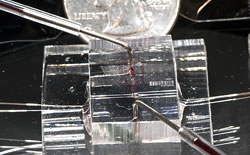 A new microflow measurement system that tracks the flow of very tiny amounts of liquids could have great implications for medical science, drug delivery and other biological fields. According to the provisional patent filed by the National Institute of Standards and Technology, the optical device is only as big as a nickel and can measure liquid movement in nanoliters per minute.

What Is the Microflow Measurement System?

The optical system was made at the Center for Nanoscale Science and Technology and invented by NIST biomedical engineer Greg Cooksey at the Physical Measurement Laboratory. It monitors how quickly fluorescent molecules in fluid travel through channels as thin as human hair. The invention can determine the amount of time that it takes for the molecules to move from one laser pulse to another.vTo begin with, the molecules are chemically modified. This modification is destroyed in the microchannel by an ultraviolet laser with a pulse wavelength of 375 nanometers. Further into the channel, a blue laser with a pulse wavelength of 488 nanometers triggers the fluorescence so that the molecules emit a green light at a 520-nanometer wavelength. The distance between the two pulses is 250 micrometers, which is about the thickness of one playing card. An optical power meter continuously measures the intensity of the green light at 250,000 times per second.

How This Invention Is Different From Current Measuring Devices

The devices that currently measure flow on a microscale have limitations. Some of them have complex microscopes and imaging systems, require calibration or aren't traceable to the International System of Units, says Cooksey. Others record data over several minutes, so tracking dynamic changes isn't possible.

The new microflow measuring system uses calculations rather than calibrations to determine flow rate. It's also more sensitive than the majority of traditional devices and produces continuous real-time data with a resolution of about 1 millisecond. Researchers can also use the invention as a flow cytometer, which measures biological cell properties in fluid streams.

Measuring small liquid or gas flows is very important in analytical instrumentation, biological fields, clinical diagnostics, drug delivery and medical science. However, conducting the measurements is a common issue, according to the provisional patent.

One problem is that the quantity that needs to be measured is usually about a nanoliter. Researchers typically desire that the flow meter be low cost and disposable to avoid contamination in medical testing. They don't always need totally accurate measurements, but they do need repeatable and precise measurements. Because of that, traditional devices aren't feasible for many applications.

How the Invention Applies to Life Science and Biotechnology

The new system can satisfy the above urgent needs. It can also provide more accuracy among medical pumps that deliver drugs into the bloodstream, especially those that deliver less than a drop of water. The invention can improve precision in cell sorting and counting as well as chemical research.

Furthermore, it allows for studying cell metabolism, states Cooksey. The fluorescent emissions will change in proportion to the metabolism. The information can be useful in cancer studies because cancerous cells have elevated metabolism rates. Cooksey also says that researchers can see real-time changes in programmed cell death and neural communication by loading cells with calcium-dye that responds differently to various calcium concentrations.